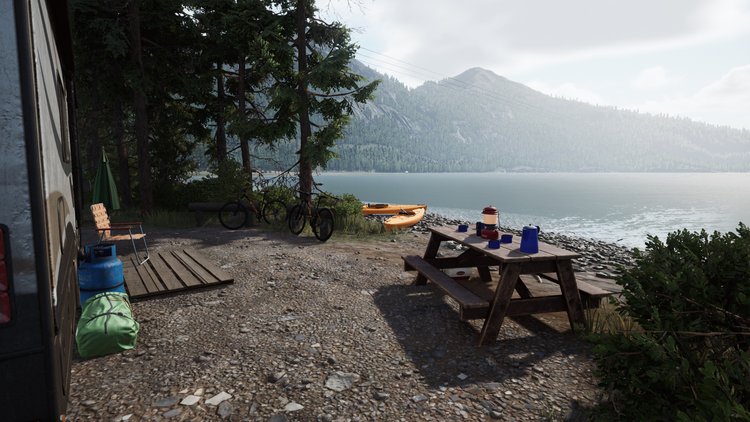 THE HUNT IS ON!

HEY, SURVIVORS! WELCOME BACK TO ANOTHER BLOG UPDATE!

THE NEED FOR SPEED

The programming team has been hard at work on performance improvements and so far it’s looking really good. We mentioned it last week in the “Death By A Million Cuts” section. This has been a multi week endeavor but it’s really paying off. In-house testing has shown massive FPS improvements in problematic areas such as Dead Man’s Flats and Seebe. Tune in to the next update for some testing results.

The Bow Valley is riddled with campgrounds as it's an easily accessible area from the big city of Calgary and the surrounding area. The loot potential of these areas is great as they often feature outdoor and survival-geared equipment. These little treasure chests also have the benefit of not being in a major town. Aside from the few infected still wandering, survivors primarily only have to worry about other survivors. Being from Canada, they must all be friendly… right?

Our Level Design department is focused on filling out the existing map as opposed to expanding our borders. Areas like this residential zone are filling up and becoming more immersive than those in any other build we’ve released. We also have some other unique locations being built out like commercial areas and burnt-out forests. Stay tuned for some sneak peaks in the next update. In the meantime, enjoy these shots of some residential outbreak destruction.

We have a few more outfits to show off from our character art side. Firstly, here’s a classic hipster/wannabe lumberjack outfit. Before the outbreak, were you going for craft IPAs in Banff? Shopping for rustic handmade pottery in Canmore? Going to cut down the family Christmas tree in a national park? No one will ever know!

Secondly, we have the classic business professional suit. With many corporate events being hosted in Banff, Canmore, and Lake Louise, business travelers from far and wide got caught in the Bow Valley when the infection broke out. The gray suits blend in with the surrounding Mountain rock, who knows where a hitman look-alike might be hiding (probably at the hotel bar).

As mentioned in the last update, we are running a small scavenger hunt in celebration of the holidays! Three prizes are available to be won. In the current 0.7 build, contenders will be required to find and screenshot three unique locations. These locations will be listed below.

2-      Duplicating screenshots for others isn’t allowed.

THE THREE LOCATIONS ARE:

1-      The fortified picnic structure down by the river. (HINT: featured in a previous update)

The first three eligible players to send an email to support@qisoftware.ca with screenshots of these three locations will get a small prize pack mailed out to them free of charge! No further hints will be given. Have fun and happy hunting, survivors!

THANKS FOR CHECKING IN! GOOD LUCK TO OUR SCAVENGER HUNTERS AND TO EVERYONE ELSE, STAY SAFE OUT THERE!

The team at QI Games