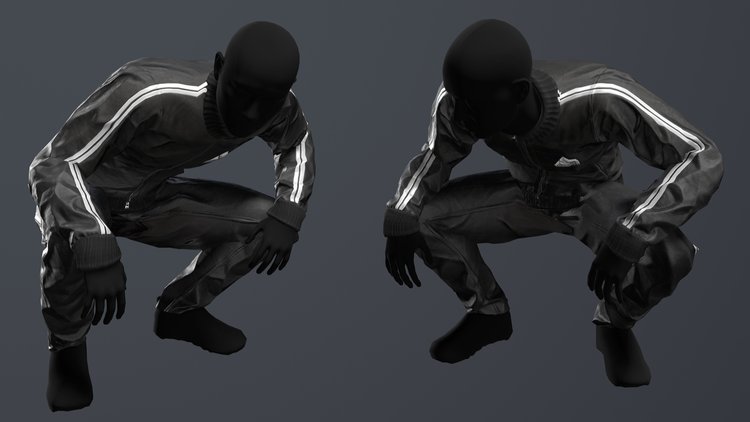 HEY SURVIVORS, ITS THAT TIME AGAIN!

We had a great week here at the office, lots of level design got buttoned up and we have some new character art to show off!

FOLLOW-UP ON A SNEAK PEAK

Firstly, we showed a single shot of an outdoor patio area in last weeks update. Thanks to Dusty’s hard work this week we now have that area completed and ready to show off! A weekend getaway resort turned amock in the apocalypse. The focus was on abandonment in this area. No time given to clean up like a place would at the end of the day.

Heels on the ground, true Slav around, Heels in the sky… American spy! We have this iconic outfit to show off. A classic striped tracksuit idolized by eastern Europe and respected by all. Male and female variants, extra stretchy to ensure maximum squatting effectiveness!

Following up from last weeks points regarding a modular signage system, its done! Julian has a few points on that.

“Last week I gave you a preview of the road sign tool I have been working on, which I recently finished by adding support for making highway signs and large highway gantry signs. Level designers can now use this tool to rapidly create any amount of required road signs for their area with minimal effort. All a level designer needs to do is open the tool, select the shape of their sign, the type of sign post, after that they can pick a symbol for the sign, add custom text, or both. Once they set all the required parameters they press a button and the tool outputs a complete road sign, handling all the hard work on the back-end.

There are now no restrictions on what kind of road and highway signs a level designer can create to perfectly fit a scene.”

As we're running up to 0.7.0's release, we thought it'd be interesting to provide a bit of a side by side. Dead Man's Flats is the core focus of 0.7.0, so it seemed as good a location for this as any. These shots are directly from in-editor, and we've tried to take them in the most complimentary lighting we could.

The difference in scale and overall world design is clearly evident, even from this first shot of the road leading into Dead Man's Flats. The motel here, as reworked by Brady, is far less flat with the road than it used to be, providing some much-needed elevation to DMF. As well, the changes to the sky, overall lighting, and foliage really start to become obvious even here.

The Elk Pass Motel has seen some substantial reworking. While it's still not finalized yet, Dusty has done a wonderful job of pushing it forwards and helping to make it feel fleshed out.

The Cup of Hope Cafe has also seen some significant changes. While we've previously offered a look at the interior, we've never really provided a clear side by side of the work our LD-Lead did on its exterior. This image, much like the first, also provides a really solid overview of the change in scale of Dead Mans Flats.

The Canada Crude/Peso gas station has been revisited pretty heavily by Patryk and is now significantly more similar to its real-world counterpart. Our evening lighting and sky changes are also especially apparent in this shot - despite both images being taken at the same time in the evening, the difference is very clear.

Thanks for checking out or weekly update once again! We are truly thankful to each and every one of you keeping up with the project!