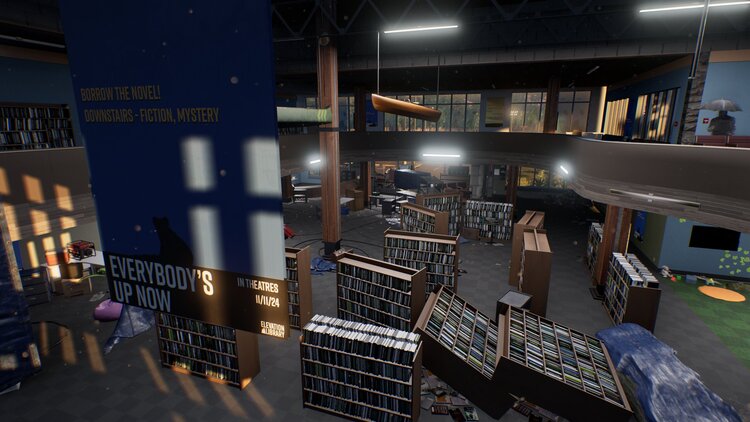 I'm back with regular blog posts for you all! We've been hard at work on the Closed Alpha version of Dead Matter since the launch. We've pushed multiple patches and hotfixes over the last couple months, with more on the way all the time. The work truly never stops on making Dead Matter the best zombie survival game we can make. From the beginning we've been working on fleshing out the world and optimizing Dead Matter, and things have been progressing nicely since the closed alpha launch. I'll dig into what the individual devs have been working on first and then we have a community roundup at the end of the post.

As usual, anything shown on this blog and on the vlogs, is a work in progress.

Kyle has been working on optimizing the game overall, including improvements to the vehicle systems and multiplayer RAM usage to improve performance. Part of those improvements include bringing legacy code from before the closed alpha up to current standards in order to refactor systems such as doors, AI, and PvP networking. Along with that, he is working on implementing improved zombie AI to increase performance and get rid of some pesky bugs related to them. Kyle is also working on new database code that should fix many issues players are having with saving/loading, as well as allowing players to save more complex things on servers such as placed items and vehicles. As if that wasn't enough, he has also implemented a new skydome with exterior lighting improvements as of a recent patch. The new skydome and lighting will continue to be improved and iterated on in future patches.

Speaking of zombie AI, here is a shot of 173 new zombies (soon to have clothes) running in a test environment:

Metamoth has been spending his time giving Morley more detail passes to make the area more interesting for players. He has helped switch over the system used to handle buildings to a more stable system that is much easier for the rest of the Level Design team and him to work with. Building materials have been given a pass to improve their appearance, buildings overall have had the interior lighting tweaked and adjusted, numerous game exploits related to level design have been fixed (and more are in the process of being fixed, thank you alpha players!), and world detailing has been expanded to give players more to find off the beaten paths of the game world. He has also been assisting with the quest system to implement substantial changes. We hope players will enjoy the quests coming to Dead Matter soon.

DrYitz (Marquis) has been hard at work overhauling locations such as the Dominion safe zone and Grotto Bunker. He added a river cutting through Morley (part of helping make the area more interesting, landscape-wise), and changed some landscape textures to bring more foliage to the map. He is also performing a detail pass on many of the houses on the map, starting with some homes near Canmore that look looted. This detail pass is a large undertaking that is - naturally - a work in progress that players will see come to life through future patches.

Nomad has been working on a couple new weapons we hope to have implemented soon.

and the makeshift crossbow:

Hax has added improved flashlights, overhauled the shooting range, added location discovery actors, added more attachments and scopes for weapons, and made the dashboard dials, headlights, and tail lights light up when turned on.

Hax has also added the FN Five-Seven and the Ruger MK VII .22 pistols:

Erlite has performed a rework of the vaulting system in Dead Matter. The new vaulting is intended to make the process a lot more fluid for players, allowing them to look around while vaulting in most cases and avoid taking control away from the player. In the future, we want the vaulting system to allow players to run, vault, and continue running without any halts in movement. He is working with the animation team to add improved animations, and they are constantly tweaking the system to give players more freedom of movement in-game. Much like the rest of the game, the reworked vaulting system is not complete yet, but it is getting there, and the team is eager to see feedback with each iteration.

Since launching the closed alpha, we've seen a massive amount of support both from our QIS Partners and the rest of the community. Some of the screenshots we've seen have been absolutely stunning. I've grabbed a couple for the post, and we - the team - will be cherry picking our favorite screenshots to be highlighted in future blog posts. So if you are participating in the Closed Alpha, show us your best and you might see your screenshot here on the blog!

Of course, we have a slew of content from our Partners that gets posted in the Partner Videos channel of our Community Discord Server and across our social media channels. Here are a few videos that have been posted in the last month or so:

These videos and many more can be found on our Discord server in the Partner Videos channel, and is where future partner videos will be posted as well. With these blog posts I'll present you with the latest videos as well as the screenshots chosen by the team.

Alright everyone, that wraps up this post. We plan on having more of these posted on a regular basis. Thank you so much for all of your continued support, and all of the feedback we've been receiving from our backers and those testing the Closed Alpha.