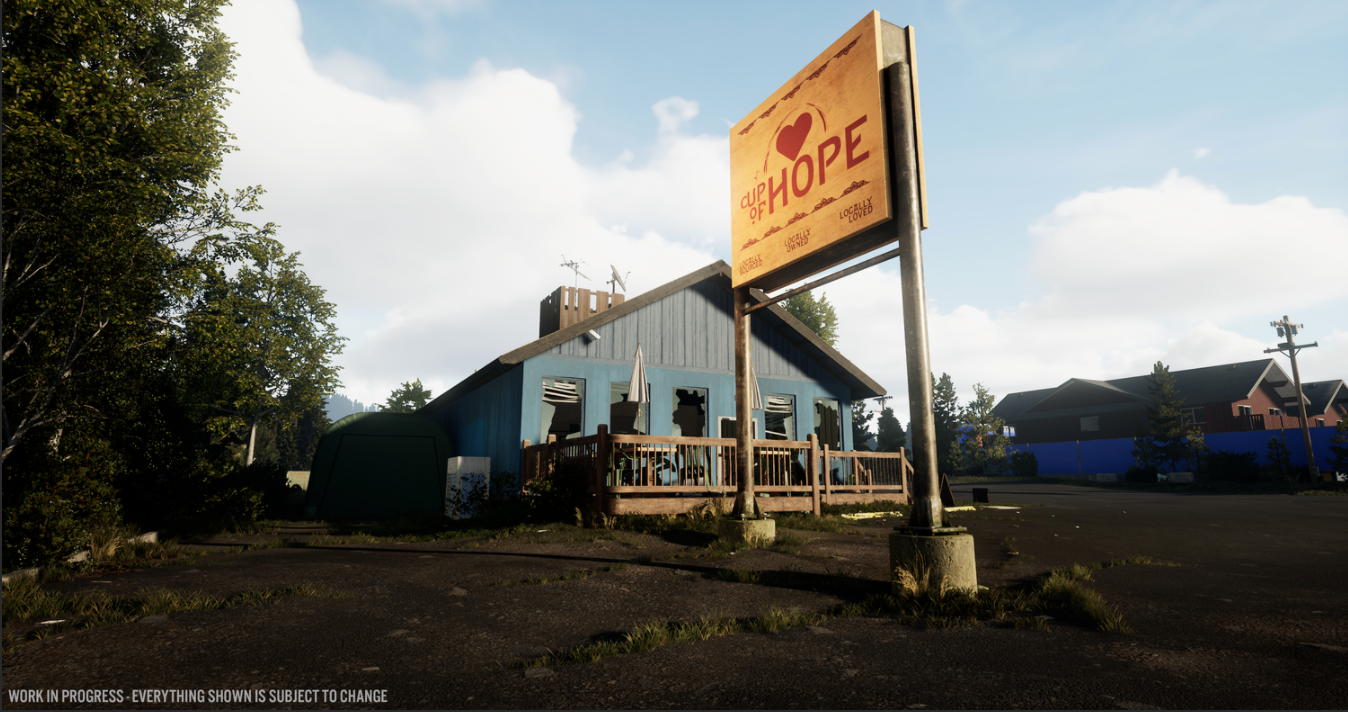 Hey folks. We know it’s been a little while since the last update, however this has been for good reason. Over the last couple of weeks, work on the game has been going very well, and we’ve all found ourselves being very busy over the last little while as a result. We’re sorry about the resultant silence over the last little bit, but to make up for this, this monthly roundup is going to contain a good chunk of new content and some talk about some of the other things we’ve been working on over the last couple of weeks. Lets not waste any more time - taking it from the top, lets start with some of what our LD team has had on the go.

When we last were talking about level design work, we mentioned we’ve been taking serious pains to ensure that we’re more accurately rooting the world in the kind of chaos one should expect after a disaster the likes of which we’re trying to portray in Dead Matter. While it’s nice to talk about these things, the real proof is in the end results we’re shooting for.

Within the old worldspace, a small building sits alongside the highway in Dead Man’s Flats. It appears to be a restaurant of some kind, but beyond this there isn’t much information to be gleaned from the location. This kind of vague location design is something that we’re really shooting to avoid for this new worldspace. As such, we’re really happy to finally offer up a first look at the Cup of Hope Cafe:

This new iteration of this place, beyond now being an identifiable location, has had a far worse go of things than other locations previously seen in Dead Matter. Having been heavily picked over by looters, this location isn’t likely to be a significant source of any rare items, but is still worth giving a look - you never know what somebody else may have missed.

Of course, these changes also apply to the interiors - places in Dead Matter previously had often lacklustre interiors, and we’re attempting to target something that feels far more convincing than some of the places we’ve previously shown and had in-game. While some locations may find themselves in better shape than others, there’s often a good reason for this.

Other locations have also been given a similar treatment - as we work forward, our aim isn’t just to make a handful of new eye candy locations, but is instead to ensure that every location is to a single standard of quality - both in visuals and performance.

Something we’ve touched on more than a few times is achieving the right level of grounding on our world - many places in Dead Matter have previously not met our standards for setting the right stylistic or visual tone, and simply don’t feel like they’re true to the locations they’re meant to portray. With that in mind, a couple of weeks ago a number of members of our studio staff made a trip out into the area around which Dead Matter is set, and produced a set of fresh summer reference images for us to build our world forwards from. This trip was valuable not just for the staff present, but more importantly was extremely helpful for our remote staff. As many members of our team do not live in the region, it’s often pretty difficult to provide good context for the content they’re working for. This trip obtained us a ton of fresh reference material of the region, and has a ton of minor details that have been incredibly valuable to both our artists and level designers.

While images like this are definitely very nice, they serve a very key purpose beyond just looking nice - there’s plenty of small details here we’ll be taking the time to ensure are present in Dead Matter. The Canadian Rockies are a unique place in that they’re a more rugged and jagged version of the Rocky Mountains than that our neighbors to the south are used to seeing. With that being the case, we very much want to be sure that all of these places look the part. We’ve said this many times, however it truly does bear repeating - just as much as any NPC or faction in the narrative, Alberta itself is very much intended to be a character in Dead Matter, and we intend to make good on ensuring our version properly represents the space for what it is.

Our programmers have also had a busy month in June. As our core gameplay systems and mechanics have made their way back into the game now, we’re able to begin pivoting over to systems that help to support the core gameplay loop. A big part of that has been our quest system.

Previously, Dead Matter’s quest system was something of a beast to wrangle. It was often something of an undertaking to add anything more complex than a simple fetch quest. As we’ve been taking the time to clean up and revisit our codebase as we work towards 0.7.0, the quest and NPC interaction systems have seen an additional pass to make them easier for our staff to work with, while also adding functionality that we had previously wanted to have in the game.

Beyond making our quest system more friendly for team members to work with, the real exciting portion of this is the new radio communication system for interacting with quest givers. Players are now able to receive quests from NPCs while out in the wild, meaning that opportunities for new jobs and quests can be obtained on the fly, as well as adding support for players to turn in quests while out in the wilds, or obtain additional guidance from NPCs while on a quest. This will offer up a lot more opportunities for players to interact with NPCs, while also making it a lot easier to keep up with what you’ll need to do while on a quest.

Our 3d artists have also been hard at work over the last few weeks. Beyond the new assets the eagle-eyed may catch in the above screenshots of the worldspace, we’ve also had some further work underway on our vehicular assets. Many have mentioned how curious it is that the police cars seen in the world are so dated for a game set in the near future when similar cars have long since been retired in the real world. We’re happy to announce that our in-game police forces have now officially moved into the 21st century:

These new police cars will of course be available in multiple liveries, not just in CPD colors, but should greatly help to round out the somewhat dated police presence we’ve had in our game world to-date.

Alongside this, something players have often asked about are RVs and Campers. This is something we’ve discussed since the earliest days of the project, and with the new vehicle art pipeline in place, we’re finally able to move forward on assets for these vehicles as well.

While it’s currently unlikely that RVs will be fully functional as player homes for 0.7.0, this first hurdle ensures that we’re in a better place than ever to have them added to the game.

Alongside vehicles, work has also been continuing on the portions of our weapons sandbox that require filling out. Given the close proximity to the United States, the impact that events in the United States will have on the narrative of Dead Matter, it was something of a given that the M9 would make an appearance in the game in one guise or another, in this case the M9A3.

While primarily a weapon issued to servicemen and women of the United States National Guard by the time of Dead Matter, the M9A3 is still a weapons platform that will have a unique presence in Dead Matter’s setting.

While all of this other work we’ve had on the go with art assets and the world itself is definitely fascinating to many members of our audience, many are also curious about how things are looking performance-wise currently.
While there’s still much to be done to achieve content-parity with 0.6.0, as it stands performance is still looking to be far better for 0.7.0. Between the optimizations we’ve made to the game, and the performance gains we’ve managed to eke out by enabling support for DX12 for users whose hardware supports it, 0.7.0 is looking to be both the best looking and best performing update to the Closed Alpha yet.

We’ve received a number of questions from our backers about their rewards over the last while, and when they’ll be added to the game. Generally, our response has been ‘when the time comes for us to work on that’ for this content - as we need to devote significant effort to ensuring that all backer rewards are implemented, and properly, we’ve wanted to take the time to make sure that we can execute on this correctly.

The time has nearly come.

In the near future, we’ll be beginning the process of getting in touch with our backers for reward tiers that are related to in-game content. This is something of a process due to the diverse platforms that our userbase is located on, but we’re finally in the position to begin moving ahead on this, and so want to get the ball rolling as soon as possible. We’ll put out an update once this process has started to ensure that everybody knows what’s going on, but we wanted to get the information about this out there as soon as we could. Stay tuned for more info - this has been a long time coming, and we’re all very excited to finally get this moving for everybody.

June has been an incredibly busy month. Between new team members coming aboard, the ongoing work on the worldspace, the new work on the quest system, and a bevy of other little things we have on the go that we’ll soon be ready to show, it’s exciting to be moving forward as we are on the new worldspace. July is looking to be just as productive and exciting a month, so stay tuned for all of that, and until next time, thank you all for your support!