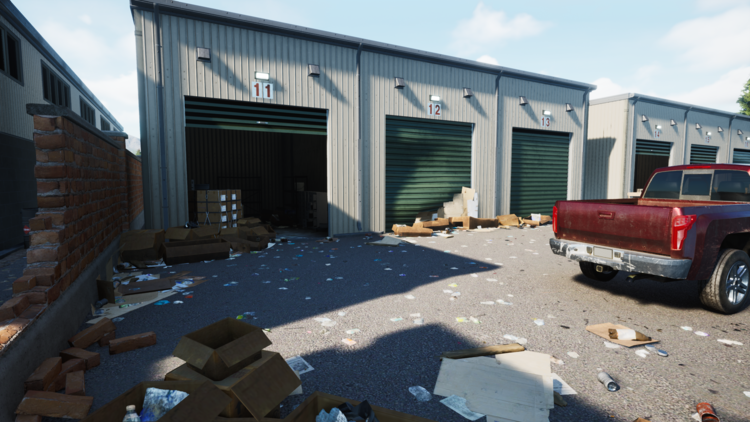 LETTER FROM THE HEAD OF STUDIO

Greetings, everyone! I hope that if you’re reading this you just enjoyed a pleasant holiday season. There’s a lot of information to share, and though it won’t be specifically about the product, it will instead provide some “under-the-hood” perspective to our supporters. Without further ado, let’s dive right in.

My name is Derek Czerkaski and I joined the team as the Head of Studio in September of 2021. I’ll be helping QI Software to organize, prioritize, ramp, and scale over the coming months as we make a strong push to get an early-access-ready candidate for our supporters. I’d like to spend less time talking about the “why” and more time addressing “how” we’re going to tackle ensuring a successful release for Dead Matter. I spent my first three months in the company in an auditing capacity. My job was to observe the company in its natural operational condition and to take notes on what worked well, what worked poorly, what didn't work at all, and what was critical for the work to get done. It was an illuminating quarter. There were some clear takeaways from this period, and these takeaways will serve as a guiding light for us throughout 2022.

…SO WHAT WERE THEY?

The #1 problem observed came down to a lack of a clear direction. Dead Matter has been in development for four years, and as can be expected, the vision has gone through numerous iterations and - more importantly - numerous people during that time period. Some examples include:

These were some of the biggest challenges faced by both the project and the team.

As a result of some of the above challenges, we ended up in a position where we frequently showcased our progress instead of celebrating our achieved deliverables. This is a common problem in game development; it is incredibly easy to get so excited about what you’re  working on that you lose sight of the fact that the work isn’t done yet. In particular, this was noticeable in our blog posts, which likely discouraged many of our backers and supporters as a result of the whiplash of our messaging strategy. An example of this could be observed in one of our posts (“We’re implementing vehicles!” → “We’ve removed vehicles from the game entirely.”). The result was a scenario where we were regularly creating expectations, only to mismanage them to our audience as a result of ever-evolving challenges within our game’s development.

Throughout development, we set out to do too many things at the same time. This frequently resulted in the team working independently on numerous features and systems at the same time, but without the proper and necessary sign-offs. In essence, we dared to dream big (which I believe is a great problem to have) while forgetting the importance of nailing the fundamentals.

At the end of the year last year, we held a studio retrospective. This was designed to do a holistic takedown of all of our progress since we started 0.7 development. All leads were required to do a thorough review of “what did we do well, what did we do poorly, where do we need to improve, which positions do we need to hire to supplement our chances for success?”. The results were clear: we needed to get ourselves organized, prioritized, and scoped in a way that was far more deliberate.

WHERE DOES THAT LEAVE US NOW?

At the end of the year, I assembled the entire team of leads and made a radical suggestion: I called for the halt of development for the month of January. This was not an easy decision to make, but I felt it was critical to ensure the success of the Dead Matter project in terms of ensuring a sustainable work environment for the staff, moving the bar of development deliverables, and preventing burnout.

WHAT ARE WE DOING DURING THE MONTH OF JANUARY?

I realize this may not be that exciting to many of our readers, but we’re making substantial changes that should drastically improve our output.

Firstly, we’ve overhauled our toolsets to be more in-line with modern development practices. We were previously using Notion for organization, Discord and G-Suite for communication, and GitHub for code commits. We’re now switching over to utilizing JIRA for sprint management, task tracking, and bug reporting; the additional analytical tools for the Atlassian suite will give us far more visibility into tracking things such as developmental velocity, bug-fixing, and story point estimates for contracting outsourced work. We’re also switching from GitHub to Perforce as a means of ensuring easier build management for our technical leads. Standardizing commit comments along with linking checked-in fixes with JIRA tickets will help us keep significantly tighter tabs on what work is being done. We’re also switching away from the basic audio tools associated with Unreal Engine and moving towards utilizing Wwise with a dedicated audio producer and composer. We’ve overhauled our website to incorporate a centralized forum, which should be deployed by the end of the month. Additionally, we’ve signed an agreement with TeamTailor, a fantastic applicant-tracking system, in order to prepare for a dedicated hiring push that will commence early-mid February; if you are a game developer (we’re open to remote but prefer local candidates) and interested in working on Dead Matter, keep an eye out for our postings in the next month!

Secondly, we’ve established an internal organizational chart to ensure clearer ownership of different reporting hierarchies within the company. Additionally, we’ve shifted to an emphasis where all leads within subsequent teams are full-time employees, and on-site. This is to ensure that core changes to the game, personnel, or practices are governed by a tight centralized body vs. a scattering of contractors from across the world.  We’ll be re-ramping the team with dedicated hires when and where appropriate, and we’re looking to grow the team by anywhere from 8 to 12 new hires in 2022. We’ve also appointed a CFO to ensure we’re being fiscally responsible throughout the next year as well as an Art Director to ensure quality-control for asset creation completed by contractors or outsourced studios. We’ve also already made a handful of senior hires which we are hoping to have come fully on-board in February.

Thirdly, in an effort to “focus” our development on key opportunity areas, we are spending a significant amount of time doing competitor analysis. Last year, with the help of NVIDIA, we received some donations in the form of GPUs which helped us to construct an on-site Playtest lab. We’ve already dumped well over 30 hours into this and it has been a tremendous experience for the team. This has allowed us to identify areas where we can prioritize development to enrich our gameplay experience as early as possible. We believe that we can be incredibly successful if we take it back to the fundamentals of the genre.

Lastly, we have begun to scope our project as a means of focusing where we strike, when, and how. We will be striving for an eight-week development cycle, with smaller, tighter iterations upon select features at a time rather than aggregate development across multiple avenues of the project. Our first intended update of the year will be almost entirely focused on the thing that is currently missing the most from our title: gameplay.

I know this isn’t your typical Dead Matter blog. Production-oriented blogs are typically less exciting than game blogs, but one value we want to stand by is our commitment to better communication and transparency with our supporters. It’s been a long road, and Dead Matter has been progressing steadily despite the myriad of challenges we have faced thus far (COVID, lockdowns, economic pains, etc). I wanted to author this blog as I recognize I am communicating radical changes to the way things have been done traditionally. In the new year, we’ll also be looking to hire a dedicated primary point of contact in the form of a Community Associate to further expand upon our commitment to better communication with our fans. Nik Zorko, our CEO and Game Director, is also planning to bring back a fan favorite, the Vlog series, later this year!

I have immeasurable confidence in Nik Zorko and the team that we’re starting off 2022 on the right foot. We’ve bloodied our noses and made our mistakes in the past, but thankfully, this team has proven itself to be dedicated, resilient, and willing to do whatever is necessary to be successful. I’m excited to share this news with our backers, followers, and supporters. Whether you’re new to Dead Matter or a longtime supporter, I hope this post will inspire confidence and enthusiasm in you as well. We have a long road ahead of us, and it’s going to be one hell of a ride, but with hard work and a little luck, the changes we’re making now should create a tangible difference in what we are showcasing today vs. what we’ll be showcasing later this year.  While we’re striving for an early access release in 2022, we’ll make this decision as we progress development throughout the year to determine whether or not this is a viable release window for us in the year.

Thank you again for all your support and trust. Keep an eye out for future blogs, which should return to a more product-centric tone.