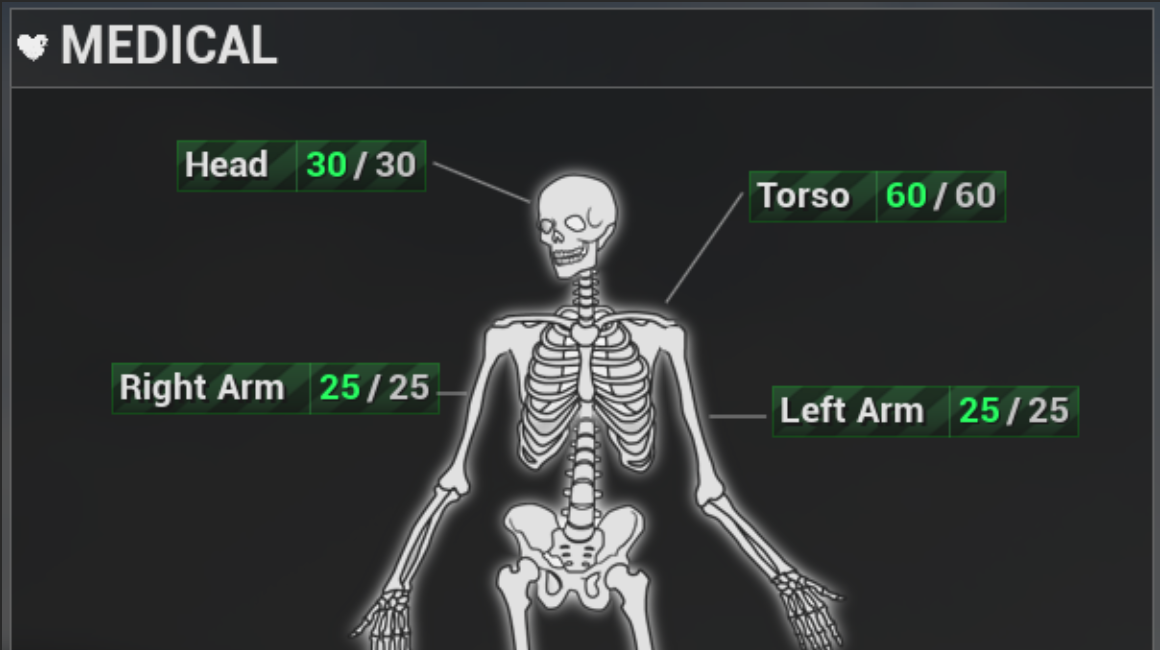 We are close to completing the new 0.6.0 patch for Dead Matter and we wanted to do a brief overview of the update to gather backer feedback before it goes out sometime next week. 0.6.0 is a very large update that not only includes a plethora of improvements that were made under-the-hood but also a large amount of changes to the game over-all. We have broken down this update to try and maintain readability as this a bit content heavy compared to our previous updates. If you are a backer that has experienced difficulty with our support system please read the note from our team lead at the bottom of this update.

As always, we hope you enjoy the update on what we’ve been working on. Let’s get into it!

There has been a significant overhaul to the medical system in Dead Matter. 80% of the code for the old character stat manager was rewritten to provide a simple and clean foundation for moving forward. Once that rewrite was completed, all of the existing medical conditions and the system that they interact with were replaced entirely. It was a bit of a painful rewrite that took quite a bit of time but we now have a much more stable foundation to move forward on.

The first noticeable change that comes from the medical system are the new HUD widgets that more clearly illustrate what your characters condition is. These widgets will always pop up when changes are made to the values that they represent. We believe this will keep the player more informed about what is going on than the previous implementation.

We have also refactored stamina and split it into two different stats. Character stamina still functions identically to the previous iteration where it would slowly go down when sprinting and start to recover when the player is standing still.

Combat Stamina is new and is only used for melee attacks. This is to address an issue that a lot of backers encountered when they would drain their stamina with a melee weapon very quickly which left them completely defenseless and useless for the rest of the fight. Combat Stamina has a fairly quick recovery compared to the Stamina used for movement and this allows for more viability in combat.

Combat Stamina is something players should always monitor as pushing back infected and keeping your distance is much more important than ever before due to our new tagged damage system. When characters take damage they will be slowed down for a brief duration, this will make encounters with larger groups of infected deadly and melee combat much more satisfying.

Since majority of our medical system has seen changes so has the user interface. You can no longer drag and drop items onto the affected limb to treat them. Instead we opted for the more simple solution of adding treatment options to all medical items. You can now just right click on a medical item that is capable of treating a condition, select your target limb and start applying the item.

Healing and recovering blood have been simplified to make for a better overall experience. You can now restore health by using a medkit or a trauma bag.  Your limb health is now your characters health which is originally the role that blood filled. Blood will also now automatically be recovered provided your character is healthy, the speed at which blood is recovered is also influenced by your hunger and thirst.

As a side note, we have gone ahead and removed the nutrition system for the time being, this has been a system that we've tried to implement without it becoming too overbearing or confusing. It didn't have the impact on gameplay that we were looking for hence why we’ll be pulling it until we can figure out how to better fit it in. This is something we would love community feedback on to help us guide our decision making.

We previously mentioned that a majority of the character stat manager was rewritten. Dead Matter’s stat manager is one of the core components for the survivor and not only does it help handle the medical system it also handles the former occupation system and the perk system.

Many backers felt that they were not playing as true survivors because of how attributes would modify gameplay and that there needs to be more equal footing between different characters.  This is why we removed attributes and why perks will now be the primary differentiator between different character builds. We feel this adds a lot more control and gives players confidence in what to expect when making a new character. Perks also grant us a lot more creative freedom with this system and balance becomes far less of an issue for everyone once attributes are out of the picture.

We’ve changed up the available former occupations for 0.6.0 and we’ve listed out each of them along with their perk. All of the perks listed below have already been written and integrated into 0.6.0, this is also true for all of the perks that you will be able to select during character creation.

Please note these are subject to change and will likely see change based on community feedback!

At the launch of 0.6.0 all of the crafting recipes that are available will be defined by their former occupation. After we launch 0.6.0 we will continue to extend this system with crafting benches and ways for players to unlock new recipes for their characters.

To craft an item, you simply drag and drop your ingredients into the recipe. Once all of the required items have been added to the recipe you just need to drag the crafted item out of the recipe and into your inventory to complete the process.

One of the overall aims for 0.6.0 is to push the game into a better direction and to make sure that every single element of the game is working when backers get their hands on it. One of the things that was missing from Dead Matter was a proper Armor system for characters to use.

Armor in Dead Matter was previously cosmetic but that is no longer the case. Armor now mitigates a set percentage of damage done to limbs that the armor is covering. The armor  will absorb damage that would've otherwise been sent to the player which lowers your chances of being injured during combat.

Since each different piece of armor has it’s own damage resistance value that influences how much damage it is capable of mitigating we will be adding a variety of different armor pieces for the player to wear. As an example, the football pads in the picture above will mitigate only 15% of the damage that the player takes whereas the heavy armor underneath will mitigate 65% of the incoming damage to the player.

Armor damage resistance values and the hit points of the armor are still subject to change before 0.6.0 goes live.

While we haven't implemented the new foliage that will be a part of the big map update we have made changes made to the foliage shading look a lot more appealing. We have also been making changes to the landscape materials for our world which should result in less blurry textures when looking at the ground in first person.

NOTE FROM OUR LEAD

As the Project Founder and Lead Developer I was gutted when I saw how customer support was being handled. Due to a lack of resources we were originally relying on a few volunteers because I was unable to directly address support requests due to time constraints. While they were understandably unable to handle the influx of people that needed help with their copy of the game or with a refund, it does not excuse the fact that cracks were allowed to form in our support system. I am sorry to all of the people that have been affected by this. I have taken steps to never allow this from happening again so that we can move forward with our community on a positive note.

To address the issues we were facing, I moved our support system to be entirely in-house in mid January. We have hired full-time staff that are physically present here with us in the office so I can manage our customer support directly and effectively. We have been issuing refunds to those still wanting one for over a week now.

If you are still interested in a refund for the game for whatever reason or if you submitted a support request that went unanswered then please email support@qisoftware.ca and we will get back to you within 1-2 business days.  I have directed our support staff to be present today and tomorrow (13th and 14th of February, 2021) to help handle requests as quickly as possible and to emphasize the fact that we want to help our supporters in any way that we can.

This update will finally be our first weekly update (yay). I know that we had promised this in the past but due to the holidays and some limitations with our old website we decided to hold off until the time was right and when we could approach things cleanly.  One of the concerns that the team has is that we will not have enough content for these updates.  So I will just come out and say it. Sometimes our weekly updates will be brief. Sometimes they will not contain a lot of content and sometimes they will contain a lot of content. This is purely as result of how game development works and I wanted to establish this ahead of time to set expectations for our backers.

Last but not least, I would like to thank all of our backers for their patience over the last few years, we have gone from a extremely understaffed team of 3 people with barely any resources to produce the project to more than 20 people actively contributing to the game with multiple staff being able to work together from a physical studio.