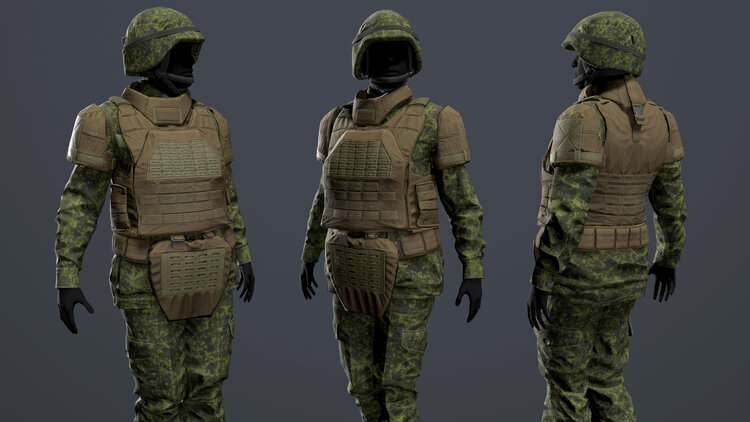 HEY SURVIVORS, WELCOME BACK TO ANOTHER WEEKLY UPDATE.

We hope our fellow Canadian survivors had a great thanksgiving and were able to unwind and reflect on what you are thankful for.

We here at QI are thankful for our loyal supporters, our health, the amazing international community we have, and you; the great people that continue to stay up to date with our progress.

PROTECTING WHAT MATTERS MOST

Right off the bat we have some awesome new character outfits. Our artist Victor put the finishing touches on this Canadian army combat uniforms, sporting the Canadian standard-issue combat uniform and a contrasting coyote armor rig to protect the vital organs.

Our main character in the current build of the game is a placeholder. Members of our community have asked about inclusivity regarding gender and race. Rest assured that has not been overlooked! Rigging for a female character is underway and we have started working on models to accommodate people of all races. This is still very much in development, and will continue to be refined and added too as development progresses.

Continuing with the development of our tutorial/shooting range area. Grant has been making an optimization and art pass on the area to help with ensuring it runs well and looks good. While with time we don’t expect Dead Matter to have as large of a learning curve as other games in the genre, we do understand that having a more “welcoming” environment for players new and old to mess around in is a nice entry point.

While visuals are always exciting and flashy to look at, there is lots happening behind the scenes. We have a short rundown from our coder Yan about what he has been doing this week in regard to some behind the scenes database work.

”The old database system was the source of many headaches, both for the programming team and you - the backers.

When we released an update, we generally had to tell the backers to delete their database files in order to prevent crashes or a bug ridden experience. This was usually due to us modifying the structure of the database to fit more data. While deleting the files worked, it meant losing all of your progress every update.

To fix this, I've rewritten the database plugin, in order to implement a new migration system. Whenever you'll start a single player game, or a dedicated server, the database subsystem will migrate your database to the latest version if needed, meaning you get to keep all of your progress without having to do anything special.

The goal is also to provide modders with simple access to the database in the future.

I've also spent the week getting character creation back up and ready, with some touches and a new environment, thanks to our level design team.

Most of the trouble comes from our new database schema, which means I had to go and rewrite a lot of queries, but I believe it will be worth the trouble in the long run.”

A QUICK WORD FROM OUR TEAM MEMBER JULIAN REGARDING A USEFUL TOOL BEING BUILT FOR LEVEL DESIGN.

“I am currently working hard on a special editor tool that will allow level designers to easily create any kind of road signs, from standard street signs to large overhead expressway gantry signs. The tool at its core is designed to be as simple as possible, allowing a level designer to just open it up, select the type of post, the sign face or faces if there are multiple, add a custom symbol or text if need be and press a button to create a static mesh of the sign for use in the map. This will allow a level designer to quickly iterate through a large number of needed road signs in a small amount of time while also saving a static mesh of the signs they create for use in other places, so the same sign does not ever need to be created more than once. Stay tuned as there is more to come on this tool next time!”

The Bow Valley hosts a wide variety of commercial support trades. From mechanics to builders and everything in between, these locations are now a valuable source of more craft-minded loot. Survivors looking for base building materials need to look no further than our new Dead Mans Flats industrial district! Our LD Patryk has been putting in work once again creating an amazing area full of content!

We have more examples from our custom retro reflective shading model. Alongside the changes to our road lines, we have also ensured that it’s properly setup so that you can drive safely and follow all marked speed limits on our new signs!

The next batch of photos feature some work in progress assets built by various members of the team. Wildlife overpasses are a key tool for planners working along the Trans Canada highway, as a means to mitigate wildlife-vehicle collisions. These locations also provide ample opportunities for ambushes, clever escapes across the highway, and offering up a somewhat more clear view of the terrain below. This new asset from Nomad is still very much a work in progress, however with time it’ll make it’s own debut on the map.

Next up, we have a new radio tower from Aaron. These are found all over the Bow Valley for obvious reasons, what’s less obvious is their numbers. The Valley’s twists, turns, and altitude changes make it tough to clearly transmit radio through the region, hence the need for a higher than usual number of towers.

We also have a newly made modular set of wood bridges, also from Brady - these will be used all over the map on trails and any location where a smaller bridge fits the bill.

Lastly we have just a nice little sneak preview of some of the work that Dusty has been doing in Dead Man’s Flats!

Thanks for tuning in! Remember to drop by our community Discord server and social media sites to keep up with the project, and chat with fellow community members!

Stay safe out there Survivors,