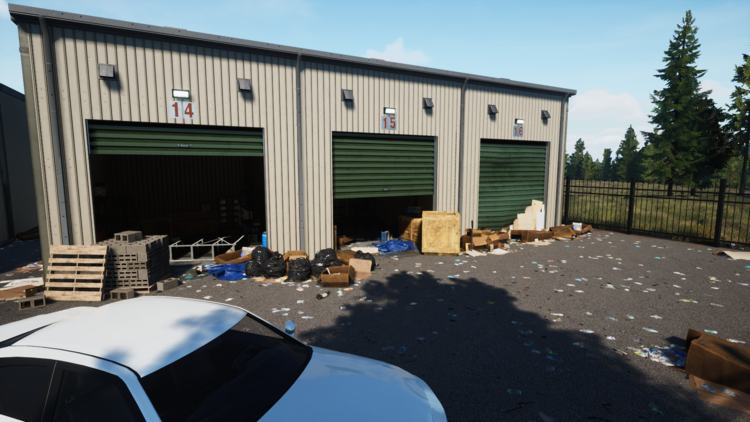 Our Lead Developer has prepared the following statement which we encourage all of our backers to read as we want to make sure our backers know what they are getting into when they are playing this experimental build. We’ve included a section on how to opt-in to the Experimental Build for 0.7.0.

HOW TO OPT IN TO THE EXPERIMENTAL BUILD

STATEMENT FROM THE LEAD DEVELOPER

Dead Matter 0.7.0 is a major update, however this experimental build is not 0.7.0, it is only an experimental preview build. If you are only interested in playing a polished version of what we've spent the past year working on then this will not be a build that you will enjoy playing.

This experimental build is generally meant to serve as a living preview of what 0.7.0 will be bringing to the table, however there are still a lot of missing features, bugs, issues with performance as well as a variety of features that have yet to be recreated or fully implemented.

To give a background of what 0.7.0 is, we started the entire project over from scratch in March of this year. We made the difficult decision to hit the reset button because we needed a stable foundation for the future and we felt that 0.6.0 represented not only a barrier to future progress with hitching issues we spent months trying to pin down with limited success but also a departure from the original vision for the project.

While some code elements, UI elements and 3d art assets have been ported from the previous iteration of the game 0.7.0 is a major overhaul with more than 60% of the codebase being entirely rewritten.

We have mainly been focusing a lot of our time on building a strong technical foundation. We do not feel that we have a strong foundation for gameplay yet, we consider the 0.7.0 experimental launch to be the first build that we can comfortably start iterating on our core gameplay systems with the assistance of our backers. This is part of the reason why we are launching this experimental build so early, it is so we can set expectations and involve our community in the iterative process.

Current Features that exist in 0.7.0 but cannot be accessed through the current build are as follows.

Features that currently do not exist in 0.7.0 but we plan on introducing them in the near future include but are certainly not limited to the following:

While there are missing features and while there are things we wished that we had more time to focus on, here's a running list of all of the things that have changed in 0.7.0. Please note that some of the features in this list may be waiting on some content for their final implementation or they are systems that our level designers have not had the time to work with.

There are also a lot of bits and bobs that were not included in the previous list. Most of the items in the feature list are things that we either spent a large amount of time on or are things that are incredibly important for building a solid foundation for a game to be built upon. Now that we've got that list out, we wanted to address the final elephant in the room. 0.7.0 is not going to be the update that makes Dead Matter a good game. 0.7.0 is simply a step in the right direction and this experimental build is a preview of where we intend on going with this project.

In all honesty, and as the lead developer on the project I was hoping that 0.7.0 would be the patch that gets the job done. That Dead Matter would be able to wash it's hands of all of the previous issues that it had faced, whether it's technical issues or issues with the gameplay itself.

I have personally written a large chunk of the code changes myself and truth be told, after rewriting a system after another system, after yet another, it started to feel like we were in an inescapable pit of shit to do.

I started to question the decision to hit the reset button and even felt it was not worth at it different points in the past, however it did not stop me from pressing forward. I firmly believe that with the time that I have had on this project to mature as a leader especially after the Closed Alpha launch which lead to a lot of self-reflection and a more inward focus towards improving the way that we as a studio function.

I have said it before, and I will say it again. With the amount of mistakes that we made during the course of Dead Matter's development before the Closed Alpha had launched, it's a miracle that we shipped. However the 0.7.0 Experimental patch going live was not a result of us managing to wrap things up at the last minute, it was the result of us iterating with daily playtests to verify the steps we were taking.

There are a lot of things that did not make it in to the 0.7.0 Experimental update or even 0.7.0 itself, regardless of what could have been I am still proud with what we are able to ship today. It is no small task to completely rebuild a game from the ground up and there were many points where I had to step outside of my comfort zone to get the results that this game deserves. I know that in terms of setting up a foundation for the future, we have succeeded on the technical front.

Even though I believe that 0.7.0 still falls short of what my original goals for the patch were, we came pretty damn close. With the wakeup call of 0.7.0's release fresh in my mind, and knowing how much work it took us to get here, I still believe that all of us will be playing a more engaging and more entertaining version of the game in a few months from now.

In conclusion, we've still got a lot of work ahead of us but we have the resources as well as the people that we need in order to execute the vision for Dead Matter.

All of us at the studio including myself are very aware of the fact that Dead Matter currently plays like a 1/10 game on a bad day and a 3/10 game on a good day, if you're being generous.

While we appreciate the fact that our strongest supports may not agree with that statement, I feel that we are being realistic. I know that our team is hungry to improve, and I do will never allow anyone on my team to lie to themselves about where our game sits.

I would like to personally give my gratitude to our backers. I wish I could thank all of you individually for the passionate support along the way. You folks are absolutely amazing and have enabled a young team of indie developers the once in a lifetime opportunity to earn a place within the games industry and we will never give up on this project or the people that have supported us.

I am extremely excited to see what we are able to come up with as Dead Matter is now firmly back on-track to a successful launch on Steam Early Access, now that a lot of the technical debt has been repaid our focus will be on further improving the gameplay and delivering on our vision for an immersive zombie survival sandbox.